Posted on 9 November, 2015 by tjockejocke 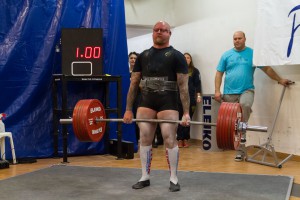 After a long period of training and some minor injuries, it was now time for a competition, the District Championships in Umeå this weekend. For a long time I´ve been waiting for a chance to try pulling the record weight 327.5 kg so the plan was to go quite easily in the squat and benchpress to save some strength for the deadlift.

I opened with two easy lifts in a large squatsuit, wrapping myself in the first squat. First 300 kg and then 310 kg and then I passed on the last lift. I benchpressed 200 kg, 210 kg and 215 kg and it felt easy. I nailed my opener at 305 kg in the deadlift and then went for the Swedish record in the second attempt with 327.5 kg and pulled it. I even tried to pull 330 kg in my last attempt but then I had cramps in the right side of the abdomen and back so I didn´t get a good start. I pulled it to the knees but it was a little too heavy.       The total was: 852,5 kg.

Well, now I have all four Master-I records (squat, benchpress, deadlift & total) and the Open-record in the deadlift. In addition I got the gold in the weight class and became best male lifter on Wilks points. So now new goals are set for Natonals, in Pitå, in January!

Gold at the Arnolds! 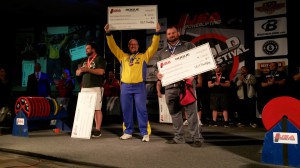 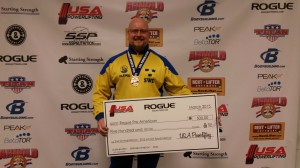 Though it´s little over a week since the Arnold Sports Festival 2015 and a well earned vacation in Las Vegas, I still feel very satisfied and happy over the noblest medal of all that I this year I got at the meet “Rogue Pro Invitational”. After a series of unfortunate circumstances, including flight cancellations and late arrival to Columbus / Ohio I still managed to perform and not just just win in the 105 kilo-class but also become second best lifters on Wilks points, that gave me a 500 USD check. Did the series: 335-235-315 = 885 kg and got 8 of 9 lifts with 3-0 white.

Posted on 3 February, 2015 by tjockejocke 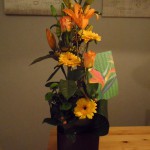 I was pleasantly surprised when I today got a big bouquet of flowers from the Department Of Recreation in Luleå, for my gold at Nationals. Thank you kindly!

Posted on 1 February, 2015 by tjockejocke Just got back from Örebro in the south of Sweden and this years Powerlifting Nationals, where I for the third time took the gold medal. Though I always want to lift more and though I´ve had some problems with my upper back these last few weeks I still totalled: 335-237,5-300=872,5kg. I even tried to pull for the the Swedish deadlift record (327,5kg) in my last attempt but it was a little too heavy this time. To top it off, I got three Swedish Master 1-records. In the squat, the benchpress and the total. Hell yeah!

Gold at the District Meet! 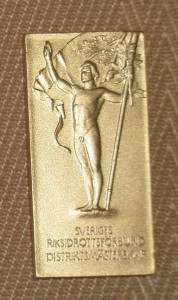 I competed last weekend at the Northern District Championships in Umeå, just going through the motions, for the coming season and though I haven´t been training with equipment for more than a couple of weeks I hit a new PR in the benchpress and totalled: 330-240-315 = 885kg.

Well, six weeks into my summer training I can only conclude that my back and the stability feels better and better. I´ll continue my raw-training for at least 6-10 weeks more, so I just have to continue down this road.

Have a great summer! Well, now one week after the Europeans in Sofia/Bulgaria, I´ve accepted that I can´t always be on top. Although I climbed one placing compared to last year and finished eight I wanted a much better total. I´ve had some problems with two discs in the lower back  since the Arnolds and I got a tear in my right forearm in the second deadlift, so there weren´t anymore kilos in my body that day.

Anyways, three good squats and ditto benches are at least something to be happy about, just have to start over! 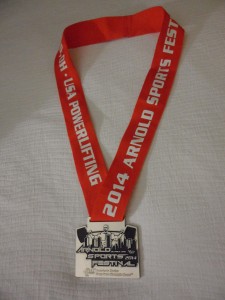 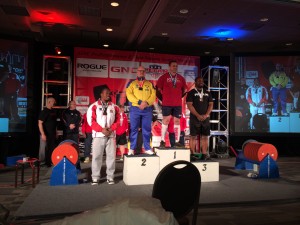 Got the silvermedal again this year at Rouge Fitness Pro Invitational / Arnold Sports Festival in Columbus / Ohio. Despite a rather mediocre result (337,5-235-305 = 877.5 kg), I had a significantly better gut feeling than at Nationals, which was the primary so now I just need to keep pushing and set my sights at the European Championships in May! 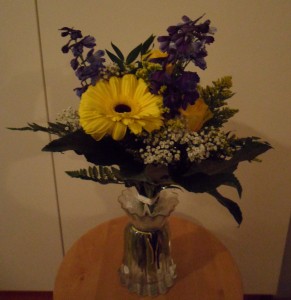 A “congratulations to the gold at Nationals” from the Department and Board of Recreation in Luleå. I am both touched and happy! 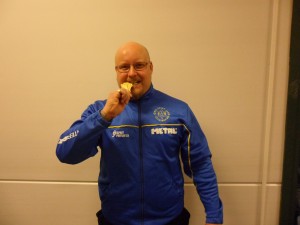 Although it didn´t at all feel good in either the body or the head, I managed to get my second gold medal at the National Championships this past weekend in Umeå and I also finished with a new PR in the deadlift. Got a hemorrhage in the right eye and felt pressure against on the forehead Thursday and since I was already a bit stressad out over the competition it didn´t make things better. Got a minor collapse during the meet and don´t remember everything but I still managed to do the series: 340-235-325 = 900kg. Now, afterwards it feels really good and the body and mind is slowly recovering.